Library Of Books and Articles
You are here: Home1 / The Main Issue2 / Issue # 3 – The Bible: Just Another Book?

LETTER FROM THE EDITOR

I thank you for your letter. I assume you received issue number two at your door, if you have not I will mail you a copy upon request.

It is obvious you spent some time formulating your letter, and again I thank you. Since I am withholding your name and address, I conclude that it does not transgress fairness to print your letter (in its entirety, except for addresses). I believe others may benefit from what I have to say to you.

Please do not look for anything retaliatory. I believe with all my heart that God loves you as much as any person, that you are very precious in His sight, and I therefore dare not spite you in any way. Because I believe there is a heaven to gain and a hell to shun, I sincerely ask you to please try to hear me.

First, when I wrote, “Darwin scratched the itch of nineteenth century liberalism for an alternative to creationism,” I did not mean to imply that his motives were corrupt or he intentionally tried to satisfy that era’s hunger for an alternative to creationism, or even that he realized he was so doing, but merely that his theory did in fact accomplish that very thing. That is why it was so eagerly embraced.

From your perspective, creationists are religious and evolutionists are scientific. I hope to convince you that the opposite is true – that, in fact, it is evolution that is based upon religious sentiment, and creation is based on true science.

Evolution vs Creation, the first edition of The Main Issue, was based on scientific facts. A computer is a scientific tool, and I pointed out that the computer proves the impossibility of evolution. By scientific observation, we can see that even the highest mountains are covered with sedimentary rock, and by the process of elimination we can safely conclude the only natural cause is a worldwide flood, which in turn can be used to validate the book of Genesis. The age of the earth can be scientifically determined by studying the decreasing strength of the earth’s magnetic field, the increasing salt content of the oceans and the depth of the meteoric dust on the moon’s surface. I pointed out the scientific evidence of fossils disproves the theory of evolution, and most scientists, both evolutionists and creationists, concur. I quoted a certain Bible scholar as saying, “Since reproduction is a condition of evolution, it cannot be a product of it.” Is that not a scientifically sound conclusion?

You state that “The very fact that the theory is being constantly modified as more and more facts become known, attests to the superiority and impartiality of science over religion.” Sir, I respectfully challenge you, is that a scientifically sound statement? A modified theory proves that science is superior to religion? I agree science is superior to religion (I am not a religionist), but that opinion is neither sustained nor reduced by the fact that the theory of evolution is constantly being changed. The only thing a modified theory proves is the original theory was inferior. Surely you can see that.

And what new facts were discovered? There never was even one scientific fact on which the theory of evolution was founded. In my study I had never come across one. If you know of one, please inform me. What scientific fact explains design without a designer? Evolutionists can only say, “It must have happened that way because there is no other explanation.” Sir, that is not science. It is not mathematics. It is religion.

Evolution is founded on the BELIEF there is no God, no creator, no superior being. That God does not exist cannot be scientifically proven. How does one prove that something or Someone does not exist? It is an assumption that can only be accepted by FAITH. Again, that is not science, but religion.

Sir, you speak of miracles. What is more miraculous and astounding and difficult to believe – life that is placed in a universe by Someone more superior to that life and that universe, or life placed in a universe by chance happenings? Chance happenings fail most people. That is why only a very few win the lottery. How could chance happenings be credited with bringing people into existence and provide them with food and water and oxygen? It is the evolutionist who uses the astounding (miraculous?) to explain the existence of life.

Your letter states, “Real scientists are required to play by the rules WITHOUT EXCEPTION.” Again, on what rules is evolution built? Where is the 2 + 2 = 4 kind of science that proves design without a designer? What scientific rules were followed when the evolutionists accepted Nebraska Man which was concocted from a tooth, a pig’s tooth, as the missing link?

In your letter you offered no factual rebuttal to refute creationism and this must be because you don’t have any. True, you offered evidence the universe could be older than 10,000 years, but that is not evidence it was not created.

And that’s the amazing reality. There is no evidence, no facts, no mathematical calculations! Yes, you present names with impressive titles. Lots of rhetoric. Passion. Anger. Insults. But no evidence! No facts! No science!

The miraculous to man is the commonplace to God. Jesus said, “With God all things are possible.” It was no big deal for God to part the Red Sea, to multiply the loaves and fishes, to open blind eyes, to raise the dead. It was no big deal for God to create the universe and all that inhabit it. It was just as easy for Him to create the stars with their light already reaching the earth, as not. But why not let man see the light of the stars? It was probably for us they were created. No, you and I cannot understand how anyone can do it, and that is simply because the Designer (God), of necessity, is so much greater than the design (us). In order for the design to understand the Designer, the design must be equal to (as smart as) the Designer, but that trespasses the laws of science and common sense.

This edition of The Main Issue gives much factual evidence that the Bible is truly a supernatural book, that is, a book far beyond the ability of man to produce. The proof of the Bible’s worth is in your hands. And it is the Bible that attests to creation.

There is more at stake here than winning an argument. For this Bible also states you will live forever, and your eternal future depends on what you do with Christ, God’s plan of redemption for you. Christ, to the evolutionist, is a product of chance. But the Bible tells us that He is God’s gift to man. Sir, if you are wrong and the Bible is right, you will pay eternally and dearly for your mistake.
You are not an atheist because it has been scientifically proved to you that God does not exist; you are an atheist because of religious or emotional motives. Perhaps you have been deeply hurt, or you are angry at God, or you are bitter against those who let you down, or you have been rejected by loved ones. I know for a fact your vehemence against those who disagree with you does not stem from a scientific conclusion.

Please consider the possibility my motive is not “pecuniary,” that there really is a new and better life for you, that you are the object of God’s love and concern, that He very much wants to embrace you into His kingdom, His family.

I have and I will pray for you. I ask EVERY Christian who reads this to likewise pray for you. I ask you to write me another letter if and when you have a change of heart, and give me permission to print it with your name attached. I am certain if Christians pray with perseverance your eyes will be open to your need of Jesus. May God make Himself real to you.
Sir, I thank you.

Most sincerely,
The editor 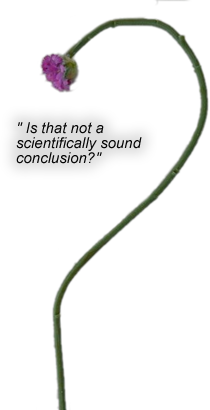