LETTER TO THE EDITOR

To the editor of The Main Issue,

I am not a Jehovah’s Witness, however, I do read the bible and know of the faith which you so naively speak of in your second issue. Throughout your paper you recognize Jesus as God, yet you claim to understand the bible. After a little research of the bible, it is evident that this is not true. The bible makes it very clear and understandable, if you’re open to understanding. Mark 13:32 says, “However, no one, not even the angels in heaven, nor I myself (Jesus), know the day or hour when these things will happen; only the Father knows.” John 5:19 says, “Jesus replied, ‘The Son can do nothing by Himself. He does only what He sees the Father doing, and in the same way.’ ” John 14:28 says, “For now I can go to the Father, who is greater than I am.”

The way you talk about Jesus insinuates He had severe mental and emotional problems, depicting Him as a man who talked to Himself, called out to Himself, praised Himself. Your reasoning would make scriptures like Mark 13:32 read, in short, “nor I myself know, only I know.” John 5:19 would read, “The Son can do nothing by Himself. He does only what He sees Himself doing.” John 14:28 would read, “For I am greater than Myself.” For further confirmation compare John 17:19-23 with Matthew 19:5 so that you might understand what is truly meant by the oneness and unity of the Father and Son. The following page lists several more scriptures regarding the Facts.

As for Jehovah’s Witnesses,
You talk of them bullying, yet whenever they have come to my door, never have I been bullied or pushed. My prior employment required that I know of and work amongst cultism at times. Cults are very ritualistic, involved in kidnapping, ceremonial brainwashings, animal and human sacrifices; they are very secretive – to mention a few things.

You say you are not being critical or judgmental yet you are the one that pokes fun at these people by saying “nice teethy smile – again. Different person, same teeth.” You liken them to that of a stranger giving a little girl a ride. You say, “It would be very foolish to go to a Jehovah’s Witness for the truth about the Watchtower Society.” You talk about Jehovah’s Witnesses having so much more bad fruit. But of course you are not being critical or judgmental! You also say, “Think for yourself; come to your own conclusions.” Yet you are the one pushing your own beliefs and misconceptions regarding these people. I know for a fact that your material is poorly researched, example: (just one example of the many misconceptions) Jehovah’s Witnesses do not ask you to join the Watchtower Society for salvation or any other purpose. The Watchtower Society is a place where the Watchtower is published by Jehovah’s Witnesses, it adheres to the bible as its authority. You said you were not being judgmental or critical, yet your paper is full of this.

You tell your readers that it would be very foolish to go to a Jehovah’s Witness for the truth about the Watchtower Society. Who better to go to, to find out the truth about this? As in your own words, “Think for yourself, come to your own conclusions.” Your paper might be worth reading if it was based on fact and not misconceptions or personal ideologies. An example of this: Where does it say in the bible that God would have you renounce Russellism?

There are so many misconceptions already regarding the bible and its words. It might be wise to not add any more misconceptions. You have proven yourself a liar and hypocrite as pointed out, using your own words. I do not consider myself better than you, for the bible says that man was created equal. I’m sure however, you are aware of what the bible says about being judgmental and lying. We all have a lot to learn. 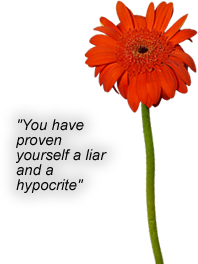