It happened on a particularly bright and cheerful Sunday afternoon in August1969. It was a perfect day for a baptism. Seven Christians, young and old, were dressed in white robes eager to obey the command of Christ to be baptized in water. Their leader, Vasil Litovchenko, a great spiritual man, led them out into the river where the water was waist deep. Other Christians stood on the sandy riverbank, singing softly. Here, in this secluded bend in the small Avacha River amidst the densely forested hills, they would be safe from the unsleeping Russian communist eyes. Or so they thought.

Lying in wait up on the hillside, spread out in a semi-circle, was a band of vicious young men, a select group from the naval academy at Petropavlovsk, about thirty-five miles south. Hired by the local police to stop the spread of Christianity, they were quite adept at inflicting pain and havoc. Armed with clubs and drunk with Vodka, they awaited their leader’s command to attack.

It took only ten minutes for the scene to change from serenity to a horrendous nightmare. Vasil Litovchenko floated dead on the water. The believers were choking from sand and stones shoved down their throats. A young lady clutched an ear split open with a club. A man’s teeth were knocked out, blood flowing freely down his chin. The men had their hands tied behind their backs, the young girls were stripped of their bloody clothes and cringed naked and defenseless in the sand, the older women wept helplessly as the ruthless men toyed with the young girls.

Nina Rudenko, a pretty sixteen years old, could not recover from the abuse she had suffered that day. The long trip to police headquarters in the back of the police truck with her captors was a nightmare, and then, with the other girls, she was forced to spend the night in a sobering cell for drunks. After her release the neighbors could hear her terrified screaming in the middle of the night. Later she was expelled from school because she frequently disturbed the class with her crying and shaking and garbled babbling.

Jesus said, “Behold, I send you out as sheep in the midst of wolves. …. Remember the word that I said to you, ‘A servant is not greater than his master.’ If they persecuted Me they will also persecute you….. Then will they deliver you up to tribulation and kill you, and you will be hated by all nations for My name’s sake.” 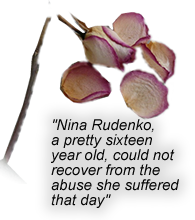 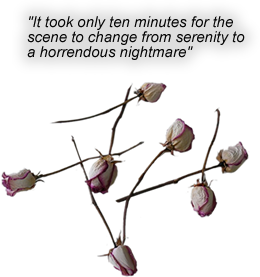