HISTORICAL VIEW: PART ONE: the founder

Charles Taze Russell was the founder of the organization now known as Jehovah’s Witnesses. He was born in 1852 in what is now Pittsburgh, Pennsylvania. An enterprising young man, at fifteen he and his father were managing a number of their own clothing stores. His parents were Presbyterian, but Charles switched over to the Congregational Church.

At an early age, Russell began to grow critical toward established Christian teachings. He became scornful of the concept of eternal punishment, he denied the deity of Christ, his views of the atonement of Christ were peculiarly his own, he renounced the accepted teaching that man possessed an immortal soul, and he refused to accept as fact Christ’s physical resurrection. Nor did he believe in the future physical return of Christ to earth.

Russell was quite successful, in his lifetime, in promoting his views and gathering disciples unto himself. In 1870, at the age of eighteen, he started a small Bible class. In 1879 he published Zion’s Watchtower, a magazine he used extensively to further his unconventional perceptions. In 1884 he established Zion’s Watchtower Tract Society at Pittsburgh, Pennsylvania. He wrote a series of seven books entitled, Studies in the Scriptures. He bought space in newspapers all over the world to herald his doctrines. He traveled extensively, and invested much energy promoting the Society.

Charles Russell considered his opinions to be unparalleled, even inspired. He once wrote in the Watchtower that his books, Study in the Scriptures, were “practically the Bible.” He wrote: “they are not mere comments on the Bible, but they are practically the Bible itself. Furthermore, not only do we find that people cannot see the divine plan in studying the Bible by itself, but we see, also, that if anyone lays the Scripture Studies aside, even after he has used them, after he has become familiar with them, after he has read them for ten years – if he then lays them aside and ignores them and goes to the Bible alone, though he has understood his Bible for ten years, our experience shows that within two years he goes into darkness. On he other hand, if he had merely read the Scripture Studies with their references and had not read a page of the Bible as such, he would be in the light at the end of two years because he would have the light of the scriptures.”

This statement reveals Russell was of the conviction no person could attain Biblical truths without his assistance, and his writings were more enlightening than the Bible itself. He did in fact consider himself to be God’s “faithful and wise servant” giving to “the household of faith meat in due season.” However, his human limitations were made obvious by such statements as this: “The drawing power which the Almighty exercises over humanity is in different degrees. Some have a strong desire to worship God, others have a weak desire, and others have no desire at all. The difference is due to the shape of the brain.” Also, while alleging to be God’s spokesman, Russell prophesied future events that never occurred.

Russell was of the opinion that God designed the great Egyptian pyramids and these could be used to predict future events. In one of his books (Volume 3 of Studies in the Scriptures), Russell explains how certain measurements within a pyramid proved that 1874 was to be the year of unprecedented troubles throughout the world. However, 1874 passed with no remarkable tragedy. While it is an embarrassment for anyone to make an inaccurate prediction, it is much more so for one who claims to be God’s spokesman.

(It is interesting to note in the revised edition of 1923, now with the advantage of hindsight, the text is made to say that 1914 was Russell’s predicted year of troubles – and since 1914 was the beginning of World War One, it would appear his prediction was accurate, unless of course the reader was aware of the original text. How did the revisionists accomplish such a feat? It was a simple matter of ‘stretching’ the “very accurate measurements” of the pyramid until they coincided with the year 1914. As one observer wrote, “If the war would not fit the Pyramid, the Pyramid must be made to fit the war.”)

Russell was entangled in a number of legal confrontations over the years resulting in certain traits of his character, as well as some of his business dealings, becoming public record, truths that would otherwise have remained obscure. For instance:

In 1903 Russell’s wife sued for separation, and in order for the court to determine fair alimony it was necessary to know of Russell’s financial situation. Thus surfaced the fact that he alone controlled all the financial forces of the thriving Society and was accountable to no one. The secretary-treasurer of the Society declared, “We are not responsible to anyone for our expenditures. We are responsible only to God.” In 1913 Mrs. Russell sued for divorce, stating the cause of the suit was her husband’s “conceit, egotism, domination, and improper conduct in relation to other women.”

Most of Russell’s legal confrontations were initiated by Russell himself, this in spite of the fact he openly declared all governments and man-made laws to be

Satan (this is the last time satan will be spelled with a capital S) inspired. On one occasion Russell filed suit against The Brooklyn Daily Eagle after that newspaper belittled, in a cartoon, Russell’s much-advertised “Miracle Wheat.” Russell claimed his Miracle Wheat would grow five times as much as any other brand, and he encouraged his followers to purchase it so the work of the Society could be better financed. He asked the court for $100,000 damages. Government agents studied the Miracle Wheat and testified it to be inferior. Russell lost the case. (The Eagle continued to scrutinize Russell’s activities, giving reports of shady maneuvers intended to bring unwarranted credibility to Russell and his organization, disclosing imaginary sermons given in imaginary locations around the world. But Russell never again filed suit against them.)

When a Mr. J. Ross, a Baptist minister from Hamilton, Ontario, published a pamphlet condemning Russell and Russellism, Russell hastily filed a suit against Ross for “defamatory libel” in an effort to suppress the damaging publicity. This court case turned out to be even more revealing then the previous one.

Ross had been very blunt in his affront against Russell’s character, his qualifications (“[Russell] never attended the higher schools of learning; knows comparatively nothing of philosophy, systematic or historic theology, and is totally ignorant of the dead languages”), and Russellism in general (“[Russellism is] anti-rational, anti-scientific, anti-Biblical, anti-Christian, and a deplorable perversion of the gospel of God’s Dear Son”). Ross was not rattled by Russell’s challenge but rather welcomed the opportunity to publicly expose Russell as a fraud.

The scene was set. It was Russell’s task to prove Ross’ printed allegations were unfounded. If he could do so his reputation would be absolved. On the other hand, the onus was on Ross to prove his allegations to be authentic, or else the court would find him guilty as a defamer of character.

After swearing before the God whose anointed servant he claimed to be to tell “the truth, the whole truth, and nothing but the truth,” the five-hour cross-examination of Russell began. The following is a sampling:

Q: Do you know the Greek alphabet?

Q: Can you tell me the correct letters if you see them?

Q: You can’t tell what those letters are? Look at them and see if you know.

A: My way (he was interrupted at this point and not allowed to explain.)

Q: Are you familiar with the Greek language?

Q: Is it true you were never ordained?

Q: Now, you never were ordained by a bishop, clergyman, presbytery, council, or any body of men living?

Russell lost the case and proved himself to be a premeditated perjurer. It was revealed his education was limited to seven years of public school, and he knew nothing about Latin and Hebrew. His own testimony established the indisputable fact he had no qualifications whatsoever to challenge Biblical interpretations.

Russell’s appetite for money, and questionable methods of obtaining it, activated more legal brawls, but his clever lawyer, J.F. Rutherford, soon to be Russell’s successor, managed to keep him out of serious trouble with the law.

Russell’s use of time prophecy (predicting future events), though every one of them failed to occur in the time predicted, had the effect of drawing many into his fold. And there were other contributing factors to the impressive growth of his beloved Society. He often expressed his conviction that God’s mantle was on him alone, and only he was qualified to discern spiritual matters. These factors, coupled with his ability to persuade, an inordinate energy and remarkable daring, resulted in a life that was to make a formidable impact upon society.

Under Russell’s direction the Society became a sturdy foundation on which was eventually built the leviathan it now is. When Russell died in 1916 Russellism was only beginning to mature. Today the Watchtower Society belittles the influence its founder has on its present-day tenets, perhaps because of embarrassment attached to his name, but the teachings of the Watchtower is definitely Russell-inspired, Russell-bred Russellism, with only sprinklings of grafted additives. And the person with the sachet who occasionally knocks on your door to ask you if you think there is any hope for our world is, whether he/she acknowledges it or not (or is even aware of it), a genuine Russellite. 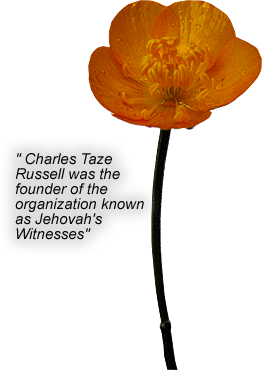 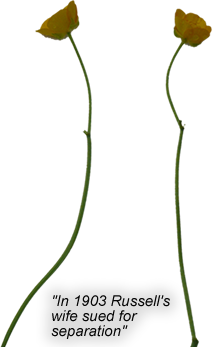 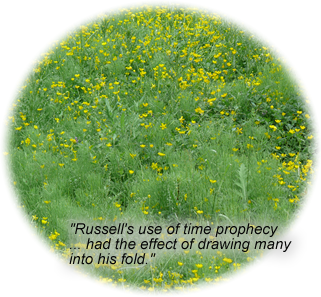