YOU HAVE AN ENEMY

Issue # 6, – Two Kingdoms, – was written for the purpose of alerting people to the reality of the devil and his ill intent toward all people. An exerpt from page two:

If someone reported to you that you had an enemy, someone who hated you and was persistently planning to harm you, to destroy you, to take away all you have, it would be most important to determine if in fact the frightful report was true. If you learned the report was a hoax you could relax and carry on. But if you concluded the terrible story was accurate you would certainly make major adjustments in your life.

Occasional references were made in The Main Issue to an extremely perverse and dangerous person who hates you and is working through an army of equally perverse underlings to destroy your life and lead you to a place you do not want to go. This report of a diabolical enemy is not a strange invention; it is indeed an age-old warning declared by Christians to every generation of every century for two-thousand years.

But is the report true? Is satan real? If he is not real but merely, as some would suggest, a myth who has survived the centuries, an invention of Christians to draw people into their fold, a mere allegory to convey the dark side of human nature, then you can relax and carry on. But if the report is true, if the enemy is real, it would be wise to make some major adjustments.

If you have an adversary who intends to do you dirt it is best to know it; it doesn’t make sense to pretend you don’t have an enemy, or to ignore that enemy. That satan cannot be seen is no reason to believe he doesn’t exist. Angels cannot be seen, nor the spirit person that leaves the body when it ceases to function, and for that matter God Himself cannot be seen, but they are all quite real. The Bible attests to their existence. For example:

This Bible verse is one of many attesting the reality of the devil, and the Bible reveals that the devil’s name is satan. This despot is much responsible for the tons of heartache and calamities man suffers. If it were not for the devil earth would be a much better place.

satan was once called Lucifer. He was a very powerful, very magnificent archangel. It is thought that he once led the choirs of angels in praise and worship unto God. Unfortunately, pride was found in him. He wanted to sit in God’s place and rule God’s kingdom, and convinced a third of the angels to join him in an effort to overthrow God. As a result, he was cast out of heaven, he and the angels who sided with him. With his fall satan lost his beauty and was transformed into a perverse creature, yet mighty still.

satan, through Eve, tempted Adam to sin. Adam had been given authority by God to rule the earth, and it was this authority the devil hoped to acquire. If he couldn’t rule heaven he could at least rule earth. When Adam fell the authority over the earth passed into his hand. For this reason the Bible refers to satan as “the god of this world.”

God declared to “the god of this world” that one of Eve’s descendants would “bruise thy head; and you shall bruise his heel.” That promise was fulfilled at Calvary when the innocent blood of Christ was shed as payment for Adam’s sin and all humanity’s sin. All that was lost through Adam can now be recovered through Christ. That is the gospel (the good news) Christians have been preaching for two thousand years. That is the heart and purpose of satan and his army of despots will soon be thrown into prison, a prison of punishment too horrible to describe, to serve a sentence without end. It is their intent and earnest desire to bring as many people as possible with them.

The number one weapon the devil uses to further his cause is deception. Jesus said of him, “He was a murderer from the beginning, and does not stand in the truth, because there is no truth in him. Whenever he speaks a lie he speaks from his own nature; for he is a liar and the father of lies (John 8:44).”

satan, through man’s co-operation, has invented many counterfeit alternatives to Christ for the purpose of camouflaging God’s true salvation. That is why there are so many religions and philosophies and cults. One of his latest inventions is what is termed the New Age Movement which is sweeping North America and the world, making inroads into almost every profession, public schools and the media. Chances are you are caught up in at least one of his fabrications.

To see yourself in spiritual perspective, you are (if you are not saved by Christ, washed clean from your sins by His redeeming blood) on the wide road “that leads to destruction.” “Destruction” is not death by calamity, but rather an eternal prison, the same prison awaiting all fallen angels. Jesus paid the price for your sins and you have opportunity to escape the eternal devastation awaiting you. Fellowship with God is yours for the receiving. “The father of lies,” through his army of demons, works hard at keeping you from the knowledge of God’s salvation. You are a prize dearly coveted by both God and satan. You will spend your eternity with one or the other. 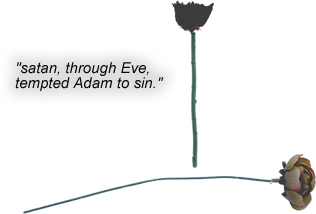