YOU LIVE IN “THE LAST DAYS” (part two)

As mentioned in part one of this article, Christians worldwide anticipate the second coming of the Lord Jesus Christ. The first time, Jesus arrived as a child under humble circumstances; the next time He will come as a mighty King to subdue the enemies of the gospel and bring a millennium of peace and harmony.

Before His coming, there are a number of momentous events that will unfold, events that have been prophesied many hundreds of years ago. There is only space for a very brief synopsis of these events, but hopefully enough to wet your appetite to research the matter further. The local Christian bookstore has much material on the subject of Christ’s soon return. These prophecies may seem incredible, but no less so than the ones long ago fulfilled regarding Christ’s first coming as a babe.

THE ANTICHRIST. The Bible tells us that a false Christ (antichrist) will arise soon after the time the Israelites return to their homeland (May, 1948). The Bible calls this man the “son of perdition” and “the lawless one.” There is little doubt he is alive today, ready to step into the international political arena. He is deviant, ruthless and power hungry. And he hates Jesus Christ. He will be recognized, however, as a man of peace (perhaps he will put an end to terrorism) and will be responsible for the signing of a seven-year peace treaty between Israel and her Arab enemies.

THE RAPTURE. Just prior to the signing, a momentous event will take place, one that has been prophesied by various writers of the Bible: Jesus Christ will come to take His people, the Christians, home with Him to heaven. Christians refer to this as “the rapture.” Of the rapture, the apostle Paul writes (1Thes. 4:16,17), “The dead in Christ shall rise first: Then we which are alive and remain shall be caught up together with them in the clouds, to meet the Lord in the air: and so shall we ever be with the Lord.” This will all happen at lightning speed, “in the twinkling of an eye.”

THE EUROPEAN COMMUNITY. Most students of Bible prophecy agree that the antichrist will rise to be the ruler of the European Community. This was foretold by Daniel about 2,500 years ago. Daniel saw a vision that (accurately) depicted five mighty empires. Four of these empires have come and gone: 1) Babylon, 2) the Medes and Persians led by Cyrus, 3) Greece under Alexander the Great, and 4) the Roman Empire. The fifth is yet to come and the Bible indicates it will consist of ten nations, all of which were a part of the fourth, the old Roman Empire. Everything points to the European Community as being that fifth world power.

THE ANTICHRIST AND THE E.C. There are now several nations banded together under the E.C. Soon, according to Bible prophecy, there will be thirteen. The antichrist will rise as dictator of these thirteen nations, and expel three nations, leaving ten. The expelled nations will be, it is thought, Germany, Ireland and Denmark, as these did not belong to the Roman Empire. The E.C. will sign trade agreements with other nations, eventually including all nations of the world. It is thought that the E.C. will give leadership to the New World Order. The leader of the E.C. will therefore become the leader of much of the world. That man will be the antichrist, “the lawless one.”

JESUS AND THE E.C. Christ will come when the E.C. is ten nations strong, as prophesied by Daniel (Daniel 2:44 amplified), “And in the days of these [final ten] kings shall the God of heaven set up a kingdom which shall never be destroyed; nor shall its sovereignty be left to another people; but it shall break and crush and consume all these kingdoms and it shall stand forever.”

THE FALSE PROPHET. This man will probably be the leader of the counterfeit church (the true Christians will have been raptured), a worldwide religion called “Babylon the great, the mother of harlots and of the abominations of the earth,” and because the Bible tells us it is set on seven hills it could refer to the Roman Catholic Church (Rome is set on seven hills). Perhaps Catholicism will unite ecumenically with the World Council of Churches. Or perhaps all these religions will be swallowed up by the New Age movement. The false prophet will proclaim the antichrist as being divine, and one refusing to worship the antichrist will be executed.

THE SEVEN-YEAR REIGN. The antichrist will reign for exactly seven years, beginning at the signing of the mentioned seven-year peace treaty and ending at the coming of Christ. This seven-year period is called “the great tribulation,” of which Christ said, “For then shall be great tribulation; such as was not since the beginning of the world to this time, no, nor ever shall be.” In order to do business everyone must have the antichrist’s mark on either his/her right hand or forehead (this could be a tiny microchip placed under the skin). However any person accepting this “mark of the beast” comes under the wrath of God. God will commission angels to bring terrible miseries upon the earth and suffering will be unparalled.

THE JEWS AND THE ANTICHRIST. The Jews will accept this (supposed) man of peace as their Messiah until the time he enters the temple in Jerusalem (the temple will be rebuilt) and erects a statue of himself. Jesus called this happening “the abomination of desolation” and warned the Jews to flee to the mountains when they saw it, as the antichrist will turn on them. This will happen exactly three and a half years into the seven-year tribulation.

ARMAGEDDON. A country from the north (Russia?) will turn on the antichrist and march toward Jerusalem where the antichrist rules. (The motive could be oil.) An army of 200,000,000(!) will come from the east (China?) to assist them (same motive?). They will converge at a place known as Armageddon, a valley not far from Jerusalem. The ensuing nuclear war will be much worse than all other wars combined. A third of the people of the world will perish.

THE COMING OF CHRIST. Christ will come in all His glory to put a quick end to the war before the entire population is destroyed. From His beloved city of Jerusalem He will rule the entire world for a thousand years. The antichrist and the false prophet will be cast into Gehennah, the eternal lake of fire. Christ’s thousand year reign will be a time of unprecedented joy and peace.

YOU AND THE COMING KING. Some of the details in this article may not be entirely accurate. It is a sport amongst many Christians to argue sequences of events, countries involved, etc. But everyone seems to agree that Christ the King is coming very soon. You will want to be ready. If you accept Christ now you will be raptured with all other Christians, and you will return to Christ to rule and reign with Him. If you do not, you will live, if you survive, through the most terrible time humanity has experienced. If you accept the “mark of the beast” you will spend your eternity with the antichrist, the false prophet, and satan in the “lake of fire.” The time to accept Christ is today. If you put it off, as you have until now, you may never make that quality decision for Christ the King. 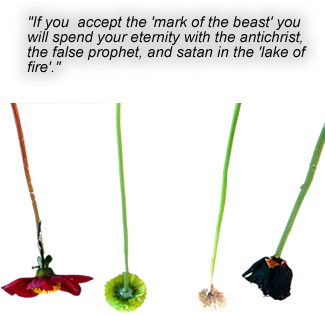