SOMEONE DIED FOR YOU

I read a story of a young village girl, very timid and somewhat plain, and a young man who loved her since childhood. It was custom for the suitor to barter for the young lady of his choice with the girl’s father. The going rate was two cows, three was considered high. The young man offered five cows (which the father eagerly accepted). When later asked why he bid so high, offering five cows instead of two or three, the young man replied that he wanted his young wife to realize just how valuable she was. And indeed the young lady’s self-esteem did strengthen. She soon shook off her timidity, her countenance changed, and life became richer for the both.

Almost two thousand years ago someone, a very special Someone, accepted a crude nail in both hands and feet. He was paying a debt He did not owe for those owing a debt they could not pay.

Paul was an apostle called by God to preach the good news of Calvary to the gentile nations, and he responded to this call with enthusiasm. For he himself had been changed by the power of the cross. Paul once wrote (Galatians 2:20): “I live by the faith of the Son of God, who loved me, and gave Himself for me.”

Who loved ME. Who gave Himself for ME. Yes, Paul knew Christ died to make a propitiation (a payment) for the sins of all people. But he also realized Christ died for him personally. Paul’s value was in the blood that flowed on his behalf, in the love demonstrated by the One hanging on the cross. Every man and woman and child can make the same statement, “Christ died for ME.” You can say with confidence and certainty, “Christ died for ME.”

The blood that flowed down Calvary’s cross on your behalf was no ordinary blood. This blood was innocent blood. Jesus “was in all points tempted like as we are, YET WITHOUT SIN (Hebr. 4:15).” “For Christ also suffered for sins, THE JUST for the unjust, that he might bring us to God (1 Peter 3:18).” There is only one man whose body contained innocent blood, the One the Bible calls “the Lamb of God.” This blood, this innocent blood, this precious blood, was poured out on your behalf.
How valuable you are! 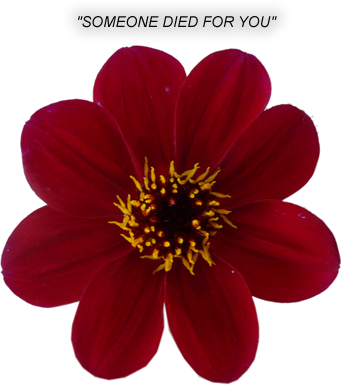