“When they had mocked Him, they took the robe off Him, and led Him away to be crucified.”

“And He, bearing the cross, went out to a place called the Place of a Skull, which is called in Hebrew, Golgatha.”

“And a great multitude of the people followed Him, and women who also mourned and lamented Him. But Jesus, turning to them, said, ‘Daughters of Jerusalem, do not weep for Me, but weep for yourselves and for your children.’ ”

Jesus knew the Jewish nation was to suffer much in the centuries to come, Jerusalem would soon be destroyed, the people dispersed throughout the world where they would experience grievous persecution.

“There were also two others, criminals, led with Him to be put to death. And when they had come to the place called Calvary, there they crucified Him, and the criminals, one on the right hand and one on the left.”

The soldiers drove nails just below each of Jesus’ hands, and a single nail through the heels, pinning His feet to the cross. C.T. Davis, a medical doctor who made a comprehensive study of the crucifixion, writes, “As the arms fatigue, great waves of cramps sweep over the muscles, knotting them in deep, relentless, throbbing pain. With these cramps comes the inability to push Himself upward. Hanging by His arms, the pectoral (chest) muscles are paralyzed and the intercostal (rib) muscles are unable to act. Air can be drawn into the lungs but cannot be exhaled. Jesus fights to raise Himself to get even a short breath. Finally carbon dioxide builds up in the lungs and in the bloodstream and the cramps partially subside. Spasmodically, He is able to push Himself upward to exhale and bring in life-giving oxygen.” (Google: Dr. C. Truman Davis)

“From the sixth hour unto the ninth hour” (from noon to three) Jesus hangs on the cross suspended by three nails, writhing in agony. He slumps downward because of the pain and because of the weight of His body. In this sagging position Jesus is suffocating and must use His legs to push Himself erect. He fills His lungs with air and drops down again. This slumping-rising action goes on for three hours until His death. For reasons unknown, God covers the land in darkness.

Hmmm. What was Pilate thinking when darkness blanketed the land at the very hour his prisoner hangs from a cross? – the One he himself declared to be innocent. Darkness in the early afternoon – what could it mean? Possibly the warning of his wife – “Have nothing to do with that just man”- echoes in his mind.

And what were the Pharisees thinking? Was the darkness a sign from heaven? Could they have been wrong? Have they put themselves under a curse?

It seems that Pilate had been pushed to his limit.

“Then the soldiers, when they had crucified Jesus, took His garments and made four parts, to each soldier a part, and also the tunic. Now the tunic was without seam, woven from the top in one piece. They said therefore among themselves, ‘Let us not tear it, but cast lots for it, whose it shall be,’ that the Scripture might be fulfilled which says: ‘They divided My garments among them, And for My clothes they cast lots.’ ”

“And those who passed by blasphemed Him, wagging their heads and saying, ‘If You are the Son of God, come down from the cross.’ Likewise the chief priests, also mocking with the scribes and elders, said, ‘He saved others; Himself He cannot save. If He is the King of Israel, let Him now come down from the cross, and we will believe Him.’ ”

“Then one of the criminals who were hanged blasphemed Him, saying, ‘If You are the Christ, save Yourself and us.’ But the other, answering, rebuked him, saying, ‘Do you not even fear God, seeing you are under the same condemnation? And we indeed justly, for we receive the due reward of our deeds; but this man has done nothing wrong.’ Then he said to Jesus, ‘Lord, remember me when You come into Your kingdom.’ And Jesus said to him, ‘Assuredly, I say to you, today you will be with Me in Paradise.’ ”

“And behold, the veil of the temple was torn in two from top to bottom.” The veil was sixty feet high and quite thick, and separated a special area called the Holy of Holies from the rest of the temple. This area was where God was present in a special way, a place forbidden to the people; only the high priest was allowed to enter once a year. That the curtain was torn “from top to bottom” indicates it was torn by an angel, at God’s instruction, and not by men.

The tearing of the veil immediately prior to the death of Jesus was very significant, indicating an end to the old way and the beginning of another. The old way was trying to appease God by obeying the laws He imposed. The new is the “law of faith,” faith in Jesus Christ and His payment for our sins. The new way is an entrance into fellowship with God, not by man’s abilities or good works or efforts, but through childlike trust in Christ, “the way, the truth, and the life.”

“Jesus, knowing that all things were now accomplished, that the Scripture might be fulfilled, said, ‘I thirst!’ Now a vessel full of sour wine was sitting there; and they filled a sponge with sour wine, and put it on hyssop, and put it into His mouth. And so when Jesus had received the sour wine, He said, ‘It is finished!’ And bowing His head, He gave up His spirit.”

“And the earth quaked, and the rocks were split, and the graves were opened; and many bodies of the saints who had fallen asleep were raised.”

And what was Pilate thinking now? And the scribes and Pharisees?

“When the centurion and those with him, who were guarding Jesus, saw the earthquake and the things that have happened, they feared greatly, saying, ‘Truly this was the Son of God.’ ”

“Then the soldiers came and broke the legs of the first and of the other who was crucified with Him. But when they came to Jesus and saw that He was already dead, they did not break His legs.”

The breaking of the legs was accomplished by a heavy blow beneath the knees. Legs broken, the victim could no longer raise himself, and died of suffocation. Jesus was already dead, but just to be sure “one of the soldiers pierced His side with a spear, and immediately blood and water came out.” 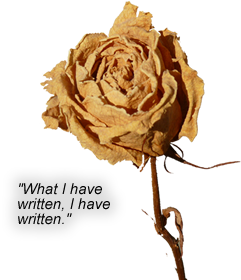