“A great multitude with swords and clubs” came to get Jesus under the cover of darkness, away from the people who would defend Him. They were led by Judas who identified Jesus, surrounded by the eleven disciples, by kissing Him on the cheek. “Judas,” Jesus responded, “are you betraying the Son of Man with a kiss?”

“Jesus said to the multitude, ‘Have you come out as against a robber, with swords and clubs to take Me? I sat daily with you, teaching in the temple, and you did not seize Me.’ ”

One of the disciples, “Simon Peter, having a sword, drew it and struck the high priest’s servant, and cut off his right ear. The servant’s name was Malchus. Then Jesus said to Peter, ‘Put your sword into the sheath. Shall I not drink the cup which My Father has given Me?’ ”

“And He touched the ear and healed him.”

“And those who had laid hold of Jesus led Him away to Caiaphas the high priest where the scribes and elders were assembled….. Now the chief priests, the elders, and all the council sought false testimony against Jesus to put Him to death.”

“Jesus kept silent. And the high priest answered and said to Him, ‘I adjure You by the living God that You tell us if You are the Christ, the Son of God.’ Jesus said to him, ‘It is as you said.’ ”

“Then the high priest tore his clothes saying, ‘He has spoken blasphemy! What further need do we have of witnesses? Look, now you have heard His blasphemy! What do you think?’ They answered and said, ‘He is deserving of death.’ Then they spat in His face and beat Him with the palm of their hands, saying, ‘Prophesy to us, Christ! Who is the one who struck you?’ ”

The Jews, being under the domination of Rome, did not have authority to put anyone to death. They could have severely punished Jesus by scourging Him with a whip, but Rome did not allow them to execute. And the Pharisees wanted Jesus dead, not simply chastised. Only then could life go on as normal; so they thought. A chastised Jesus would change nothing; Jesus must be eliminated. So they brought Jesus to Pontius Pilate, the Roman governor, determined to persuade him do that nasty task for them.

“Then they led Jesus from Caiaphas to the Praetorium, and it was early morning….. Pilate then went out to them and said, ‘What accusations do you bring against this man?’ They answered and said to him, ‘If He were not an evil doer we would not have delivered Him up to you.’ ”

“And they began to accuse Him saying, ‘We found this fellow perverting the nation, and forbidding to pay taxes to Caesar, saying He Himself is Christ, a King.’ So Pilate asked Him saying, ‘Are You the King of the Jews?’ And He answered, ‘It is as you say.’ ”

“And while He was being accused by the chief priests and elders, He answered nothing. Then Pilate said to Him, ‘Do You not hear how many things they testify against You?’ And He answered him not a word, so that the governor marveled greatly.”

Upon discovering that Jesus was a Galilean and therefore under Herod’s jurisdiction, and anxious to escape this very uncomfortable quandary, Pilate sent Jesus to Herod. “Now when Herod saw Jesus, he was exceedingly glad; for he had desired for a long time to see Him, because he had heard many things about Him, and he hoped to see some miracle done by Him. Then he questioned Him with many words, but He answered him nothing. And the chief priests and scribes stood and vehemently accused Him. Then Herod, with his men of war, treated him with contempt and mocked Him, arrayed Him with a gorgeous robe, and sent Him back to Pilate.”

“Then Pilate, when he had called together the chief priests, the rulers, and the people, said to them, ‘You have brought this man to me, as one who misleads the people. And indeed, having examined Him in your presence, I have found no fault in this Man concerning those things of which you accuse Him; no neither did Herod.’ ”

Pilate “knew that because of envy they had delivered Him. While he was sitting on the judgment seat, his wife sent to him, saying, ‘Have nothing to do with this just Man, for I have suffered many things today in a dream because of Him.’ ”

“So then Pilate took Jesus and scourged Him. And the soldiers twisted a crown of thorns and put it on His head, and they put on Him a purple robe. Then they said, ‘Hail, King of the Jews!’ And they struck Him with their hands. Pilate then went out again, and said to them, ‘Behold I am bringing Him out to you, that you may know that I found no fault in Him.’ Then Jesus came out, wearing the crown of thorns and the purple robe. And Pilate said to them, ‘Behold the Man!’ ”

Pilate thought the sickly sight of a chastised Jesus would appease the mob of Jews, and it seems that was his reasoning when he had Him whipped. Scourging is a gruesome discipline as F.J. Dake explains: “A scourge was a Roman instrument for severe bodily punishment. It consisted of a handle with about a dozen jagged pieces of bone or metal at each end to make the blow more painful and effective. The victim was tied to a post and the blows were applied to the bare back and loins and sometimes to the face and bowels. The flesh was cut in several places by each blow. So hideous was the punishment that the victim often feinted and some died under it.”

“Behold the Man!” Pilate shouted to the mob. Flesh hung in bloody strips from Jesus’ mutilated body. Bruises from being struck on the head with reed rods colored His face. The purple robe and crown of thorns was a mockery to His claim of being a king. His head was swelled like a balloon from the thorns digging into His scalp. His beard was matted with the spittle of soldiers. The noble Person who just yesterday walked with unfeigned dignity among the populace – possessing an incomparable stately bearing that came not from learning but knowing He was indeed the King of kings, the very Son of God – was now a pathetic weakling barely able to stand, His face grimaced in torment. Surely, Pilate must have thought, the people, His own people, would now be appeased, their lust for revenge satisfied. Surely they would cry, “Enough! Set Him free!” Pilate, though the hard ruler he was, must have been amazed when the merciless mob cried, “Crucify Him! Crucify Him!”

“Pilate sought to release Him, but the Jews cried out, saying, ‘If you let this Man go, you are not Caesar’s friend. Whoever makes himself a king speaks against Caesar.’ ”

“When Pilate saw that he could not prevail at all, but rather that a tumult was rising, he took water and washed his hands before the multitude, saying, ‘I am innocent of the blood of this just person.’ ” He then sentenced Jesus to be crucified.

The mob must have been ugly indeed, and most fearful, to cause a hardened Roman ruler to crucify a Man he himself declared to be innocent. It is certain that satan was at the scene with a host of demons inciting the crowd, bringing it to a mad frenzy.

Pilate, the Jewish leaders, and satan would have all been astonished to learn that Jesus was there by choice, that He could have escaped anytime He chose by simply calling angels to His aid. Jesus had previously said, “I lay down My life….. No man takes it from Me, but I lay it down of Myself.” 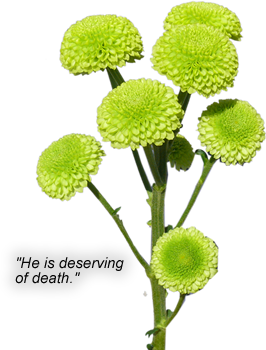 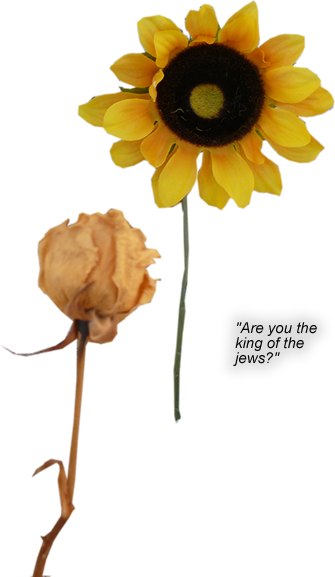 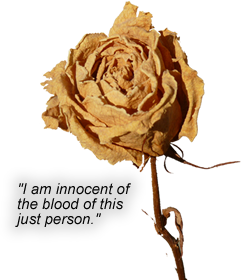 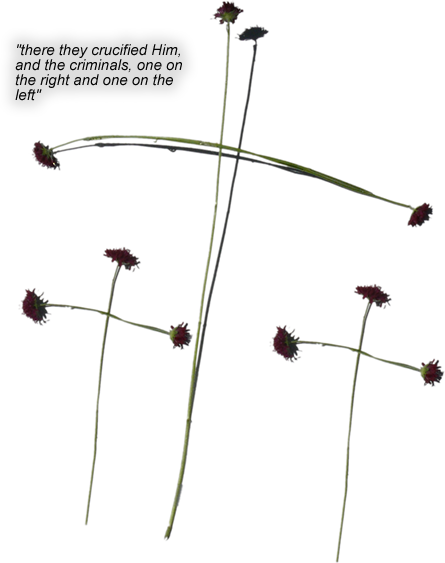