HE HAS MANY ENEMIES

It seems Jesus always had enemies. When Herod heard the news that the Christ-child was born and purported to one day become a king, he had every child in Bethlehem under the age of two years executed in an effort to snuff out the life of Jesus. However, Joseph, stepfather of Jesus, was alerted by an angel in a dream, and escaped into Egypt.

When Jesus began his three year ministry at the age of thirty, He immediately made enemies with the powerful religious leaders, the Pharisees. The Pharisees were much like many religious leaders of today – they held lofty positions of leadership, were influential in the affairs of men, and were apportioned much esteem. And like many leaders today, they placed heavy burdens on the people, replaced the teachings of God with man-made doctrines, and used their influence to keep their people away from God’s salvation.

When confronted by the Pharisees, Jesus never backed up one inch. As a matter of fact, He was often the aggressor. While having compassion on the prostitute and tolerance for the thief, He lashed out at the Pharisees. Because it was they who distorted the word of God and steered the people’s devotion to themselves. Filled with zeal for the Father He loved, Jesus verbally flogged these men, and did so publicly:

“Woe to you, scribes and Pharisees hypocrites! For you devour widows’ houses, and for a pretense make long prayers.”

“Woe to you scribes and Pharisees hypocrites! For you travel land and sea to win one proselyte, and when he is won, you make him twice as much a son of hell as yourselves.”

“Blind guides, who strain at a gnat and swallow a camel!”

“You are like whitewashed tombs which indeed appear beautiful outwardly, but inside are filled with dead men’s bones.”

“You outwardly appear righteous to men, but inside are full of hypocrisy and lawlessness.”

“Serpents, brood of vipers! How can you escape the condemnation of hell?”

The Pharisees refused to repent, and seeing their credibility ebbing, tried to discredit Jesus before the people. But they always came out the loser. For three years their hatred for Jesus festered, and they plotted His death. Afraid of the people, they arrested Jesus at night, having bribed Judas to lead them to Him.

Prior to His arrest Jesus was in the garden of Gethsemane praying, “Father, if it is Your will, remove this cup from Me; nevertheless not My will but Yours be done.” The cup was the cup of suffering soon to begin. Luke writes, “And being in agony, He prayed more earnestly. And his sweat became like great drops of blood falling down to the ground.” F.J. Dake writes, “It is a recognized fact that under extreme mental pressure, the pores may be so dilated that the blood may issue from them; so that there may be bloody sweat. A number of cases are on record of such agony.”

It was more than the awaiting cross that brought agony to Jesus. Scripture declares that Jesus, “bore our sins on His own body on the tree.” To any of us, this would be a grievous happening. But to Jesus “who knew no sin” it was almost unbearable. Jesus had never experienced the slime of sin. Only He could claim that satan “had nothing in Me.” But now, “Him who knew no sin (was ) to be sin for us.” The one and only innocent was to become grossly contaminated. The lepers He healed were cleaner by far than what He would become. Tomorrow.

Praying in the garden, Jesus knew that tomorrow He would “become a curse for us (for it is written, Cursed is everyone who hangs on a tree).” Bearing the sins of man, He would be rejected by His own Father. From the cross He would cry “out in a loud voice ‘Eli. Eli, lama sabachthani?’ that is, ‘My God, My God, why have You forsaken Me?’ ”

That was tomorrow. Tonight He asks His Father if it was possible, if there was another way, to “remove this cup.” But there was no alternative. He could hear the soldiers coming. 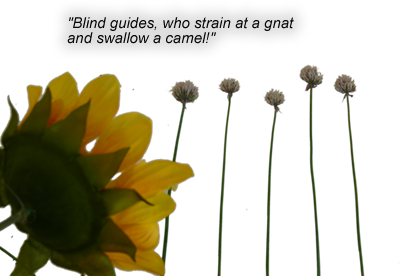