Theodora and Marozia were mother and daughter of an influential family of tenth century Rome, their lives were intertwined with those of the popes, the many popes, of their day. Marozia had her start at the age of six when she was made to witness the remains of Pope Formosus being dragged through the streets and then thrown into the River Tiber. Pope Formosus had at that time been dead for a number of months but that didn’t stop the present pope, Pope Stephen VI, from having him tried for past offenses. They sat the decaying corpse on the papal throne, clothed him in a manner befitting a pope, and found him guilty. (Pope Stephen VI was soon thereafter imprisoned and strangled – replaced by Pope Ramanus who was removed four months later – to be replaced by Pope Theodore II who lasted 20 days – before replaced by Pope John IX who actually died in his bed.)

Theodora, the mother, installed Pope Benedict IV (who died 3 years later) and then Pope Leo V. Pope Leo V was captured by Cardinal Christopher who then sat in the pope’s seat until imprisoned by Cardinal Sergius who became Pope Sergius III. Marozia, the daughter, became Pope Sergius III’s mistress at age 15, having one child (who was to eventually become Pope John XI).

Theodora then installed Pope Anastasius III and then Pope Lando. After disposing of Pope Lando she installed her lover who became Pope John X. After Theodora’s death Marozia participated in having Pope John X killed and replaced by Pope Leo VI.

Marozia disposed of Pope Leo VI, replacing him with Pope Stephen VIII – who soon disappeared. At this time Marozia installed her son Pope John XI, 16 years old. Her other son, Alberic, threw his mother Marozia in prison, placed half-brother Pope John XI under house arrest, and installed Pope Agapitus II. Alberic was also responsible for the installation of his son Pope John XII, 16 years old, who made the popery one smashing party until he left Rome with the papal purse and, years later, returned to dispose of his replacement, Pope Leo VIII. Pope John XII’s career of torturing opponents and beheading clerics came to an abrupt end by a hammer blow to the head by an infuriated husband who caught the pontiff with his wife.

It was Pope Gregory V who gave the order for the aged Marozia to be smothered with a pillow (after given absolution for her many sins). 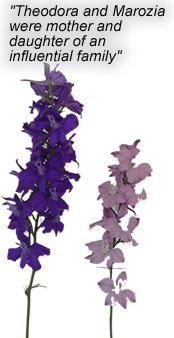 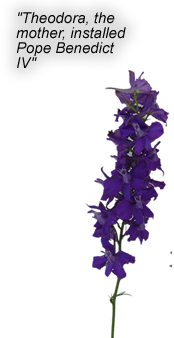