Christianity is being in union with Christ. This can only be accomplished by the power of God. God brings a person into this union when that person comes to Christ – repenting of sins, asking to be permanently in union with Christ, and accepting Christ’s payment for our sins and His lordship over our lives.

What Is A Christian?

Born-again. John 3:3 (Amplified): Jesus answered him, I assure you, most solemnly I tell you, that unless a person is born again (anew, from above), he cannot ever see (know, be acquainted with, and experience) the kingdom of God.

It all starts here. A man is not a Christian until he has been “born again,” born of the Spirit of God. As one is born into his natural family, so is one born into God’s family. The new birth is given by God to those who come to Christ to be forgiven and to receive Him as Lord (Boss) and Savior (from the consequences of his sins).

A Christian is one who has accepted the redemption of God. Someone came and paid the debt that each person owes to God for the sins committed against Him. That someone is Jesus. The payment was His innocent blood shed on Calvary’s cross.

Forgiven. Romans 4:7 (Amplified): Blessed and happy and to be envied are those whose iniquities are forgiven and whose sins are covered up and completely buried.

A Christian is forgiven. Psalm 103:12: “As far as the east is from the west; so far has He removed our transgressions from us.” And Jeremiah 31:34: “For I [God] will forgive their iniquity, and I will [seriously] remember their sins no more.”

Saved. Romans 6:23 (Amplified): the wages which sin pays is death.

A Christian is saved from the just punishment that is due him because of his own sins, sins against the One who created him. That punishment is severe and non-ceasing. You may have heard much of the love of God but little of the severity of God. Know that the destiny of every sinner is an eternity in Gehennah, the lake of fire. (See issue # 5: Heaven and Hell.) This place is ghastly beyond comprehension. But the Christian has been saved from this eternal horror, as his sins have been “covered up and completely buried.”

Registered. Revelation 20:15 (Amplified): if anyone’s [name] was not found recorded in the Book of Life, he was hurled in the lake of fire.

A Christian’s name is recorded in the Book of Life, presumably at the instant one comes to Christ to be forgiven and saved. His reservation is made, a place prepared, and the citizens of heaven await his arrival.

Son or Daughter. Galatians 4:6 (Amplified): because you [really] are [His] sons, God has sent the [Holy] Spirit of His Son into our hearts, crying, Abba (Father)!

At birth you became either a son or a daughter. You didn’t work for it or deserve it; it happened simply because you were born into your family. If and when you choose to become born-again by the Spirit of God, you will likewise become a son or daughter of God. There will be a knowing inside you that God is now your Father and such you will freely call Him.

Justified. Romans 5:9 (KJ): being now justified by his blood, we shall be saved from wrath through him.

A Christian is justified (made just), certainly not by her own good works but because Jesus made her just. 1Peter 3:18: “Christ also has once suffered for sins, the just for the unjust, that he might bring us to God.” To be just is equivalent to never having sinned.

Sanctified. 1Corinthians 6:11 (KJ): You are sanctified

To be sanctified means to be set apart. Christians are set apart from the world, special and acceptable in God’s sight, this because of what Christ has done for us.

Righteous. Romans 3:22 (Amplified): the righteousness of God which comes by believing with personal trust and confident reliance on Jesus Christ.

How Does One Become A Christian?

One becomes a Christian by coming to Christ. One comes to Christ in prayer asking Jesus to forgive his sins and telling Jesus he wants to be in union with Him and will trust Him and Him alone for salvation. 1Peter 5:5: “God resists the proud and gives grace to the humble.” One must humble herself before Christ, admitting she is a sinner in need of forgiveness. Jesus has promised: “He that comes to me I will in no wise cast out.” 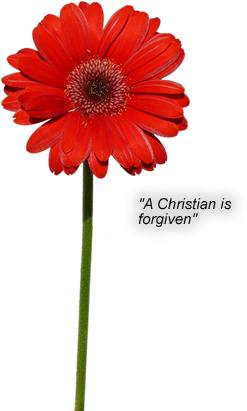