Catholics are taught their petitions are more likely to be answered if they ask Mary (the mother of Jesus) to present their request to God on their behalf. Mary is given a place of high prominence in the Catholic’s heart, higher than any other saint. Mary is considered to be “the mother of God,” the “Queen of Heaven,” and a perpetual virgin (she never surrendered her virginity). In most churches there is a large statue of Mary, and the faithful light candles before it. Catholics must believe, their salvation depending on it, that Mary is the “Immaculate Conception” (she was conceived without sin, as was Jesus), and that Mary was taken up to heaven before she died.

The CC has fought bitterly among itself over the centuries regarding the Immaculate Conception of Mary. Thomas Aquinas, an early theologian highly respected by the CC, wrote, “the Blessed Virgin contracted original sin.” Many other Catholic leaders voiced the same opinion. Nonetheless, in 1854 Pope Pius IX decreed infallibly the Immaculate Conception of Mary. In 1950 Pope Pius XII declared the Assumption of the Virgin (Mary was taken up to heaven before she died).

PROBLEMS WITH THE BLESSED VIRGIN MARY

1. Mary was a virgin when Jesus was born, but afterwards had sexual relations with her husband Joseph. This is verified in Matthew 1:25 (speaking of Joseph and Mary): “But he had no union with her as her husband until she had borne her firstborn Son.” Furthermore, Mary had at least two daughters and three other sons, all recorded in New Testament writings. James, writer of the letter of James, is “the Lord’s brother.”

2. To say Mary was born without sin and never sinned is blasphemous. Only Christ maintained a sinless life. Mary called God her “savior.” Savior from what? Only those in sin need a savior. Also, Jesus said of all people born John the baptist (not Mary) was the greatest.

3. “Blessed” does not mean sacred or pure, but rather fortunate, to be envied, happy. Mary is quoted as saying (Amplified), “all generations will call me blessed and declare me happy and to be envied.”

4. Mary is the mother of Jesus the man. While Jesus was divine in His human form, Mary had nothing to do with His divinity. She was not and is not the “mother of God.” God has no mother.

5. Nowhere in Scripture are Christians instructed to pray to the dead. Jesus taught us to pray to the Father in His name. Mary is another mediator between God and man, yet Scripture declares there is but one mediator, the Lord Jesus.

7. There is no verse in Scripture hinting that Mary did not die a physical death.

8. The CC teaches Catholics must believe the Immaculate Conception and the Assumption of Mary if they hope to attain salvation. However, Jesus says that to be saved we simply have to come to Him. “He who comes to me I will in no wise cast out.” Who does one believe? 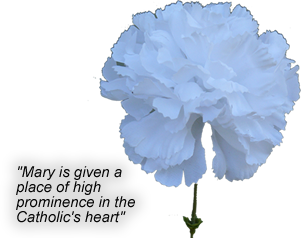