Information in this article has been gathered from The Secret Teachings of the Masonic Lodge, co-authored by John Ankerberg and John Weldon (Moody Press).

The Masonic Lodge (also known as Freemasonry) is a powerful fraternal order and the world’s largest secret society. From the first Grand Lodge founded in London, England in 1717 there has sprung over 33,700 Lodges worldwide. The first Canadian Lodge was established in 1745. Each Lodge leader, the Worshipful Master, is the absolute ruler of his district.

Masonry has a cultivated system of secret signs, symbols, and oaths. Two examples of each is cited for the reader’s perusal:

1) A Mason will cross his legs, the left over the right, to let another know that help is requested. The other Mason will acknowledge he has received the message by crossing the right leg over the left.

2) After giving an oath (10th Degree Scottish Rite) a dagger is placed under the chin and brought down to the waist, a sign of willingness to be split open should he be found guilty of dishonouring his pledge.

1) The square and compass overlapping each other, and the letter “G” in the middle. The square symbolizes morality, the compass spirituality and the G means God (to some the G stands for geometry or gnosticism).

2) The sword pointing at a heart. This symbolizes justice, God rewarding men for their good deeds.

1) From the 18th Degree of the Scottish Rite:
I, _______ , do solemnly and sincerely promise and swear under the penalty of all my former obligations which I have taken in the preceding degrees, never to reveal directly or indirectly, the secrets or mysteries of [this degree],….. under the penalty of being forever deprived of the true word, to be perpetually in darkness, my blood continually running from my body, to suffer without intermission the cruel remorse of soul; that the bitterest gall, mixed with vinegar, be my constant drink; the sharpest thorns for my pillow and that the death of the cross may complete my punishment should I ever infringe or violate in any manner or form the laws and rules which have been, are now, or may be hereafter made known or prescribed to me.

And I do furthermore swear, promise and engage on my sacred word of honor, to observe and obey all the decrees which may be transmitted to me by the Grand Inspectors General in Supreme Council of the thirty-third degree… So help me God and keep me steadfast in this my solemn obligation. Amen.

2) From the 14th Degree of the Scottish Rite:

I do most solemnly and sincerely swear on the Holy Bible and in the presence of the Grand Architect of the Universe…Never to reveal…the mysteries of this our Sacred and High Degree…In favour of this, my obligation, I consent to have my belly cut open, my bowels torn from thence and given to the hungry vultures.

The beginner enters Masonry at the Blue Lodge level which consists of three degrees (Entered Apprentice, Fellow Craft, and Master Mason) and then, if he chooses to advance, ascends either the 30 degrees of the Scottish Rite or the 11 degrees of the York Rite. In the Scottish Rite he will be given such titles as Secret Master, Master Architect, Grand Pontiff, Knight of the Brazen Serpent, Prince of Mercy, etc. If he advances through the York Rite he will be rendered such titles as Most Excellent Master, Select Master, Super Excellent Master, etc. However most Masons never advance beyond the Blue Lodge and therefore remain “unworthy” of the “greater mysteries” of the Scottish and York rites, and are ignorant of true Masonic purposes and teachings. Many teachings are rooted in medieval occult and religion.

The Masonic Lodge has many kindred organizations such as the Order of the Eastern Star and the Order of Job’s Daughters for women, the Benevolent and Protective Order of Elks, the Loyal Order of Moose, the Independent Order of Odd Fellows, the Shriners and many more.

The aspiration of the Masonic Lodge is to bring all mankind together in peace and harmony under the Masonic umbrella. It sets itself as an example of tolerance, accepting all faiths and all people (although they believe all non-Masons and unlearned Masons to be in darkness). It involves itself in humanitarian causes, thus gaining the acceptance of the populace. One example is the Shriner’s Circus which supports hospitals for children.

The novice Mason would be surprised to know the occultic nature of the higher Masonic Degrees. Often the Lodge Master has become entrenched in occultic practices and is himself a medium with great powers (obtained from the spirit world of darkness). 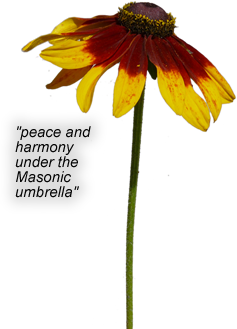 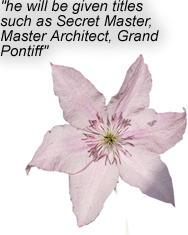